Who doesn’t love a good science experiment?  Unfortunately, I don’t think I inherited a lot of my Dad’s scientific genes (he was a chemist), but I do get a kick out of trying new things that seem a bit weird and nerdy.  And ‘geek’ is now ‘chic’, so why not totally geek out?

With this experiment, I am trying to sprout sweet potatoes slips (tiny potato vines) from organic sweet potatoes that I bought at Whole Foods (Japanese & Jewel).

And yes, I probably looked like a total weirdo in Whole Foods whipping out my phone and taking pictures of the sweet potato displays and foraging for the gangliest looking ones that might already have some little roots.  It’s a wonder they let me out in public.

With a little water, the sweet potato will start to grow roots out the bottom and then the tiny plant vines (slips) will grow out of the top of the potato.  Once planted in a garden or container, each slip should produce approximately 10 sweet potatoes.

The method to grow slips that seems very nerdy / Bill Nye-esque to me is sticking toothpicks in a sweet potato to keep it propped above water in a jar.  Even though I consider myself to be a garden geek, I found a lazier method that I thought I would try first.  I saw it posted on The Outlaw Garden at http://outlawgarden.com/2012/04/25/grow-your-own-sweet-potatoes/.

So as you can see below, I chopped my sweet potatoes in half and just stuck the chunks in a plastic takeout container.

Then I put the chunks cut side down and filled the container with about 1 inch of water.  And yes, my Japanese sweet potato is somewhat anatomically correct.

Below is a picture after a week.  The Jewel seems to be progressing with a few very small roots, but no slips have emerged up top.  I think the little bumps are where the slips will pop up.  The Japanese just seems to be chilling out and it might just end up in my composter.

Even though I’m not using the scientific method to make a groundbreaking discovery, I think Bill Nye the Science Guy would approve of my sweet potato growing experiment (although I guess he now supports GMO’s, so maybe not).  I also think my Dad would be proud.

I hope this experiment is as successful as my last garden-related experiment – ripening green tomatoes in a cardboard box using an apple.  The rotting apple naturally releases ethylene gas which ripens fruit (geek speak is so hot)!

Last year, I successfully grew “red, white & blue” (‘mercia!) potatoes.  Below is a picture of my potato patch that took over my entire raised bed garden.  Despite my obvious talent for growing potatoes, the thought of growing SWEET potatoes never even crossed my mind!  Unlike regular potatoes, you can’t just cut up a sweet potato and plant it in the ground as a tuber root veggie.  And unlike regular potatoes, sweet potatoes are a hot summer crop.  Speaking of hot…

What do you call a stolen yam?

Hehe, yes, I am garden geek. 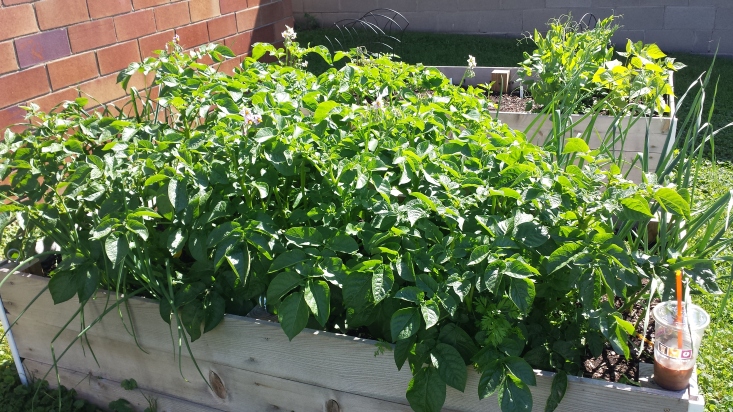 Knowledge is power and geek is chic.