I evaluated the sweet potatoes to see if I could directly transplant them or if I would have to get the slips to grow roots first.  My Jewel potato had some impressive slips, but unfortunately none of them had roots growing outside of the potato. 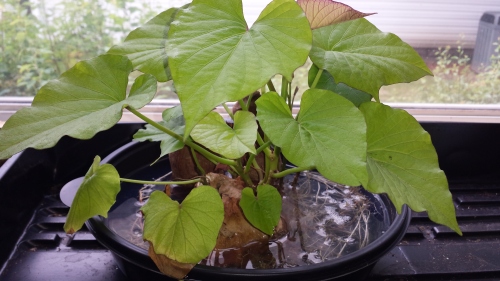 So with kitchen shears I cut the slips off where they met the potato.  Here is the potato post haircut. 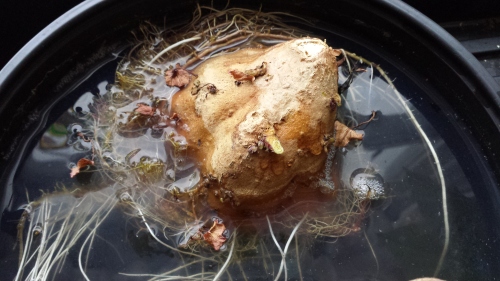 I then needed to find small vessels where the stems would be emerged in water and the leaves could balance on top.  I sometimes like to indulge in adult beverages while gardening, and while doing so I came to the conclusion that these shot glasses would be a perfect fit for my slips and not look weird sitting on my windowsill at all.  My neighbors must think I’m such a lush and/or weird-o. 🙂

The slips balanced perfectly in the shot glasses!  And only after a day, little roots started growing out of the bottom of the stems.

My Japanese sweet potato had slips that had roots that formed on the outside of the potato.  Domo arigato Mr. Japanese Sweet Potato!  I actually took Japanese in college as an elective, but don’t be impressed, that’s the only phrase I remember. 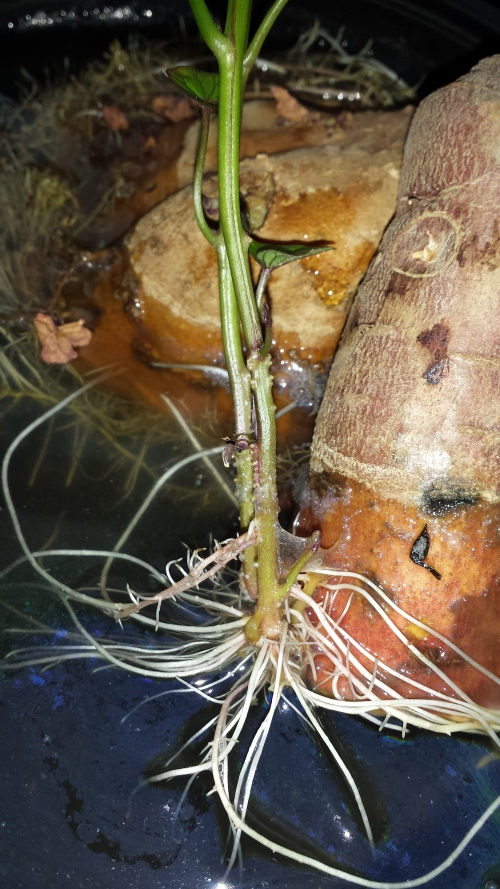 I decided I would pluck those off and try to keep the roots intact as much as possible and directly sow them into my planter. 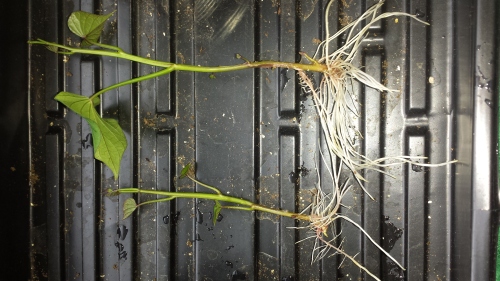 I bought a whiskey barrel (inspired) planter at Home Depot.  It has cedar in the wood, so it should resist rotting and last a very long time.  I filled it with a mixture of organic raised bed soil and compost. 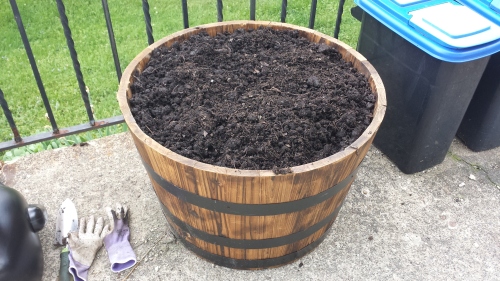 It will probably be a permanent piece of my back porch decor because after filling it with dirt it probably weighs more than me.  Here are the Japanese slips planted in the barrel.

Since they are so small, I’m not sure if they are going to make it, but I thought it would be worth a shot to try and get a jump start on growing some taters.  I also don’t think they will appreciate the low temperature in the 40’s the next couple days here in Western PA.  I have not lost hope because Mr. Japanese Sweet Potato never ceases to amaze me.

BUT I’m thankful that I have shots (of jewel sweet potato slips) lined up!